Baros the Belgian Shepherd is an absolute top dog 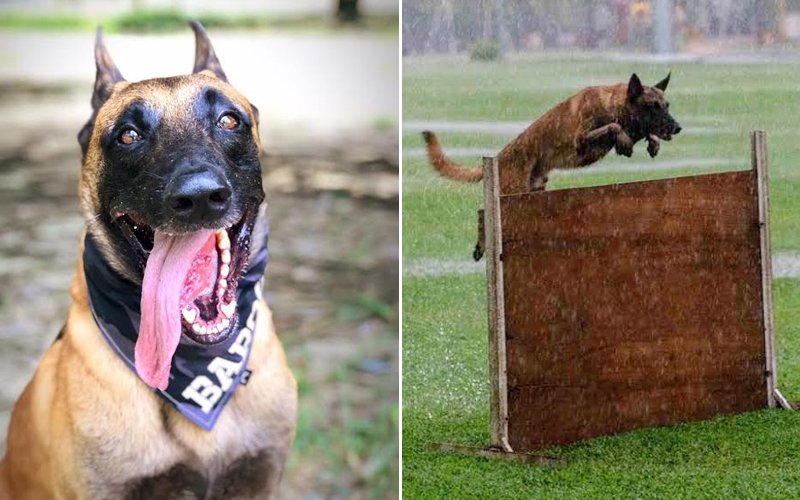 All dogs are “good boys” and “good girls”, but Baros Von der Tigerland deserves the compliment of “the best and brilliant boy ever”.

It’s not just because of his good looks, but because this six-year-old Belgian Shepherd with a World Champion lineage from Finland has won multiple awards and titles simply for being agile, powerful and obedient!

Baros’s owner and trainer, Brandon, told FMT he’s loved the idea of Police K9s ever since he was a young boy, and was intrigued by the world of dog sports.

He started watching videos and competitions on YouTube, which inspired him to get a Belgian Shepherd. And the rest, as they say, is history.

“On the day I went to collect Baros, he was running around with his siblings. As I walked into the house, I wanted to see if I could point out which one Baros was,” recalled Brandon.

Out of all the eight puppies, Brandon singled out one particular pup, scanned its microchip and found out that it was indeed Baros!

“During that time he never ran to me, but now we are the closest of buddies. He’s still very much a puppy though – very sweet and loving but now with a more matured brain,” said a smiling Brandon.

Brandon also enthused that Baros has brought so much joy to the family and does extremely well with children. And although Baros’s breed is normally associated with the police, he is one of the most loyal and intelligent dogs out there.

The two boys work hard daily to train for both the IGP competition and Malaysia’s Search and Rescue team, and Baros makes an easy partner as Brandon describes him as having the right temperament, nerves, courage, intelligence and desire to do work.

According to Brandon, the training for IGP consists of three phases which are Tracking, Obedience and Protection.

Tracking uses the senses of the nose and requires stamina and endurance, while Obedience and Protection tests the dog’s agility, power, temperament, nerves and how well the dog handles stress.

“All in all, IGP is a lovely sport that demonstrates harmony, handler loyalty and proper structure,” said Brandon.

“I’ve seen many videos or even in real life when dog owners can’t get their dog to do a certain exercise and then they get frustrated. But in my case, it has taught me patience and most importantly that Baros and I are a team,” said Brandon.

Clearly, all the time Brandon and Baros spend training together is worth it, as not only do they get to bond with each other but they have also managed to achieve IGP 3 – which is the highest level of the IGP sport!

“That’s my fondest memory so far, as we trained together ever since he was a puppy until he achieved that status.”

IGP aside, Baros has also clinched many titles such as the Malaysian Kennel Association (MKA) Vice Champion Obedience of the Year 2016 award and IGP1 and IGP2 previously.

It may seem that Baros is the walking and living epitome of ‘work like a dog’, but Brandon says Baros would prefer nothing else.

“He just loves to work. Period! It’s his goal to please and to be able to get out there to do what we do. It’s his pride and joy. Plus, he’s not a dog that gives up easily. If he wants it, he gets it.”

TELL US ABOUT YOUR PET: FMT Lifestyle readers are invited to send in pictures (landscape format) and a short video (if any) of their furry, scaly or feathery friends to [email protected]. Don’t forget to include details like your pet’s name, age, breed and a short story about them.