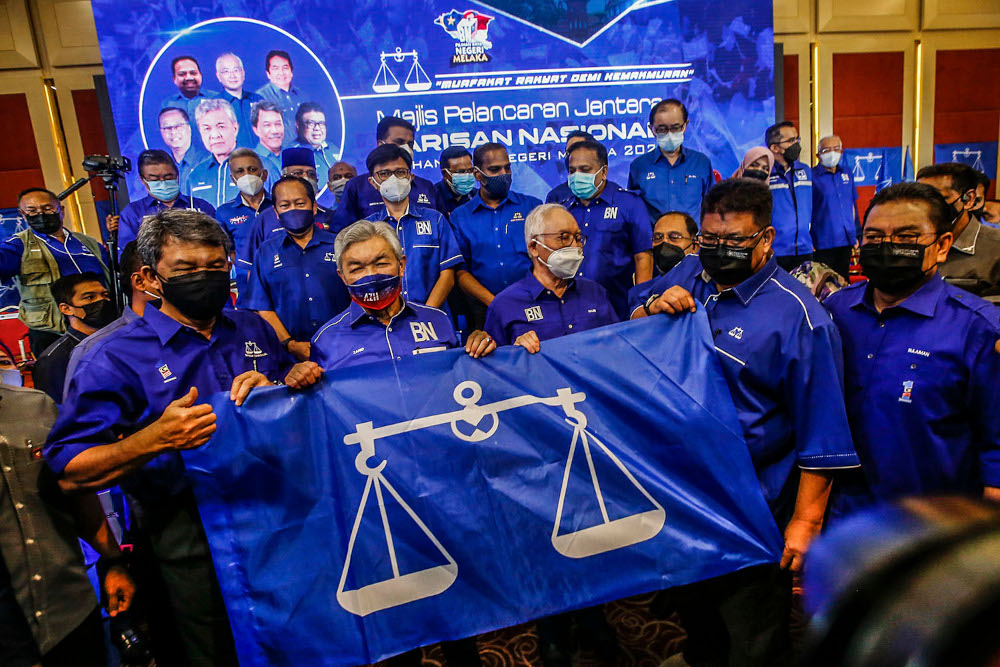 Barisan Nasional leaders pose for the camera during launch of the coalition’s election machinery for the Melaka state election at the World Trade Centre Kuala Lumpur October 27, 2021. – Picture by Hari Anggara

KUALA LUMPUR, Oct 28 – The Health Ministry has slapped Barisan Nasional (BN) with an RM10,000 fine for the latter’s failure to ensure adequate physical distancing during the coalition’s election machinery launch for the Melaka state poll at the World Trade Centre yesterday.

In a statement posted on Twitter, the ministry said the Kepong Health Office issued the compound under Act 342 for violating event organising standard operating procedures (SOP) under Phase Four of the National Recovery Plan.

The fine was addressed to the secretary-general of BN.

This comes after the Malaysian United Democratic Alliance (Muda) cried foul over a RM4,000 fine for a press conference announcing its entry into the Melaka state election race yesterday.

Muda secretary-general Amira Aisya had pointed out that Datuk Seri Najib Razak and BN have yet to receive similar fines.

In a video attached to a tweet, Amira claimed the authorities had given the party permission to hold the press conference the day before, so long as it abided by standard operating procedures (SOPs) including social distancing.

The Muda press conference was held to announce that the youth-centric party would contest in the Melaka state election despite not yet being officially registered.

The Melaka state election will take place on November 20.