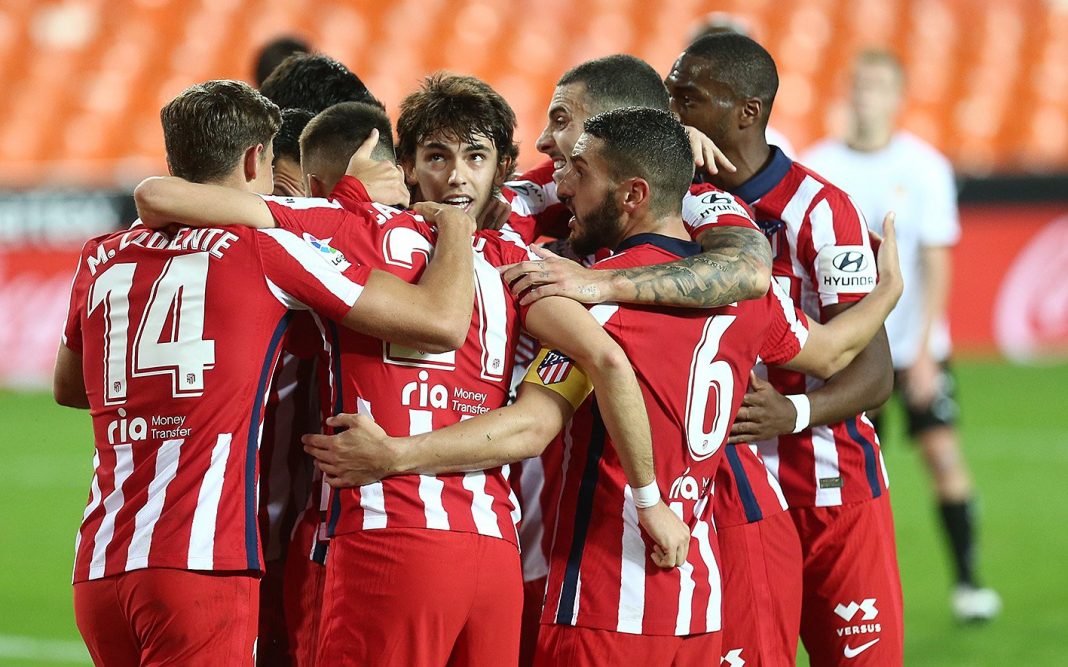 Diego Simeone’s side stays second but are equal on 23 points with Sociedad with a game in hand on the leaders thanks to Toni Lato’s own goal 11 minutes from time.

Stingy Atletico have conceded just twice in their nine league matches so far this season and have only scored two less than La Liga top scorers Sociedad, who host third-placed Villarreal on Sunday.

“We have made huge progress since April, since that wonderful match at Liverpool,” said Simeone, referring to the Champions League last 16 tie his team won 4-2 on aggregate.

“The return to La Liga (after the first lockdown) was very good and the team was already starting to show encouraging signs. This is the result of the progression of all of the players.”

Simeone offered a round of applause to his former teammate and friend Diego Maradona following the iconic Argentine’s death on Wednesday, while both teams held a minute’s silence before kickoff.

Atletico’s win at the Mestalla puts them four ahead of Villarreal and six in front of reigning champions Real Madrid, who face Alaves in Saturday’s late match.

It came without a host of absences, including Luis Suarez following the striker’s positive Covid-19 test earlier this month, and Simeone said he would have an update on the Uruguayan’s condition on Sunday.

“I spoke with him (Suarez) on the phone, he really wants to come back. The team needs him, and I hope he will come back in the best possible way,” said Simeone.

Fellow traditional title rivals Barcelona are 12 points back in 13th place, although they host Osasuna in Sunday’s early match and will still have two games in hand on Sociedad come the end of the weekend.

Atletico will face European champions Bayern Munich in the Champions League on Tuesday hoping to reach the knockout stages with a match to spare.

Their aim will be to join in the next round Sevilla, who qualified for the last 16 on Tuesday and are up to fifth in La Liga after a 1-0 win at relegation strugglers Huesca.

Youssef En-Nesyri won the points for Sevilla after nipping in at the near post to tap in Lucas Ocampos’ low pull-back with seven minutes remaining in a match dominated by the reigning Europa League champions.

Julen Lopetegui’s side are one point behind Real Madrid as they scope a top four spot and a return to Europe’s elite competition for next season.

Sevilla also held a tribute to their former player Maradona, who signed for the Andalusian club in 1992 after the end of a long drugs ban which hastened his exit from Napoli.

He stayed one season before returning to Argentina with Newell’s Old Boys.

A minute’s silence was held before kickoff in which the Sevilla players wore shirts with Maradona’s number 10 on the back while the song ‘My Dear Buenos Aires’ played over the loudspeaker.

Huesca remain 19th, level on seven points with bottom side Celta Vigo after failing to win a single match of their 11 so far.

In the early match, newly-promoted Elche and Cadiz shared the spoils in a 1-1 draw which continues their surprise starts to the season.