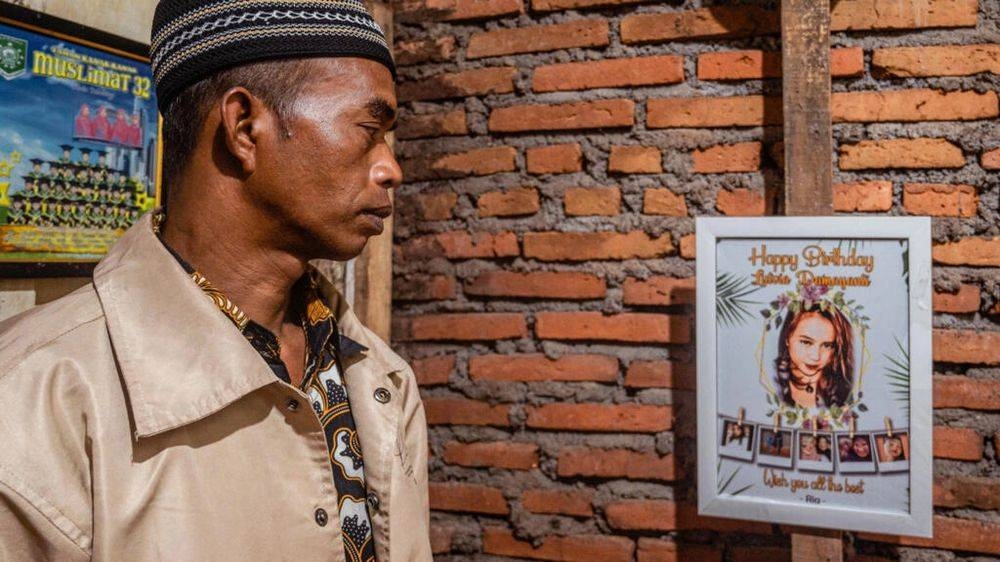 Mochamad Munif condemned police for firing tear gas into packed stands at a stadium, sparking a crush that killed his daughter. — AFP pic

MALANG, Oct 7 — Indonesian father Mochamad Munif looked at the grave of his young daughter, sprinkling petals across it before bending down to kiss the square white stone slab and utter the words he never wanted to.

“If you have done any mistakes to me, to your father, I forgive you,” he whispered to himself at a cemetery in the city of Malang as his second daughter and her grandmother cried next to him.

Munif, like so many others who lost loved ones in a stadium stampede at the weekend, was unable to comprehend how his 20-year-old daughter went to watch her first football match and came back dead.

Lutvia Damayanti was at the overcrowded game in Malang on Saturday that descended into tragedy when police tried to quell a pitch invasion by firing tear gas into packed stands, sending panicked spectators rushing for small or closed exits.

At least 131 people including 32 children died and hundreds more were injured in one of the deadliest disasters in football history.

The family still don’t know the circumstances of the daughter’s death, whether she died instantly or later in hospital, but Munif blames police.

“Why should it (the tear gas) be fired at the stands?” he asked. “While supporters such as my daughter were not at fault?”

Many were killed by asphyxia after being pushed up against closed gates that became warped by the force of the crowd. Munif said his daughter’s face bore no marks of trauma.

He was renovating a house in the East Javan city of Surabaya when colleagues told him a deadly stampede had unfolded at the Kanjuruhan stadium in his hometown, a two-hour drive away. Then he got the call that every parent dreads.

His daughter was in an ambulance travelling to the family home in Malang, his younger brother told him by phone, after she had attended the derby between fierce Javan rivals Arema FC and Persebaya Surabaya. His heart sank.

“I knew that if she was in an ambulance, she had already died,” the 47-year-old told AFP, recounting the moment that would change his life forever.

He cannot remember his journey home, one shrouded in a blur of grief.

When he arrived to find her body lying on the floor and a sheet was pulled back to reveal her face, he passed out.

Lutvia’s mother was reluctant for her to go to such a heated match even though away fans were banned, but she relented.

“She begged her mother, who allowed her after she told her, ‘This is the only time I want to watch football. I will not watch it again,'” said Munif.

Munif is angered by the police response, describing their actions as “unacceptable” and pointing the finger at them for his daughter’s death.

Fifa’s safety guidelines prohibit the use of crowd control gas by police or stewards at pitchside.

President Joko Widodo has ordered an investigation. The tragedy has stoked the ire of Indonesians against a police force that critics have long accused of using excessive violence to quell unrest.

Six suspects are facing criminal charges, including three police officers, and authorities are to conduct a safety review of all stadiums across the country.

The incident has reinforced Munif’s view that football matches in Indonesia cannot be held safely and the police “cannot be trusted” to guarantee spectators come back alive.

Munif, who regularly watches European football matches at home, said the episode had reinforced his “hatred” for Indonesian football because of the lack of security.

The government should extend a temporary ban on football matches indefinitely to prevent another tragedy, he said after reciting verses from the Koran.

“It should stop here so that there are no more victims in the future,” he said, standing next to a birthday greeting on the wall adorning a picture of his late daughter. — AFP