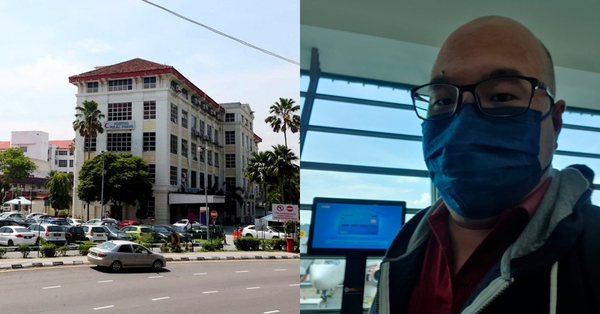 In a Facebook post, the aspiring neurosurgeon shared his grievances after he was placed in a rural district hospital in Miri, Sarawak, instead of a large tertiary hospital in a city, where he could continue his interest and training in neurosurgery.

The medical officer with the Ministry of Health (MOH), Richard Lim, said he had just completed two years of housemanship training, and was already in the neurosurgery department in Penang Hospital for two months.

“When I found out my next placement would be in Sarawak, I was actually feeling a little disappointed, I won’t lie. Things were going great at the neurosurgery department in Penang. I learnt a lot from my colleagues and they were also disappointed to see me go,” he said.

The 31-year-old shared that he grew even more frustrated with the system when his appeal to MOH to stay in Penang was rejected, despite having legitimate reasons

Besides hoping to stay in the neurosurgery department, Lim said he appealed to stay in his home state because his father is a diabetic amputee, who mostly depends on his mother to carry out daily activities and move around the house.

“But of course, it wasn’t successful,” said the disappointed junior doctor.

Lim said he then had to face the chaos that came with having to move across the country, with no forewarning whatsoever of where he was going to work or find a home in the whole state of Sarawak

This administrative issue has been brought up before by online movement Hartal Doktor Kontrak, as well as by other doctors from many batches before Lim, who have also gone through the same negligence.

“Two weeks in advance, I called up Jabatan Kesihatan Negeri (JKN) Sarawak to ask about which hospital I would be placed, so that I could start looking for accommodation and prepare all necessary stuff before moving. But their reply was, ‘Sorry doctor, we don’t have the name list of doctor placements in Sarawak yet’.”

He called them one week and also three days before flying, and was met with the same answer.

“Their reply was, ‘Don’t worry doctor, just come to Sarawak and we will discuss it’. I was a bit flabbergasted at their reply,” said Lim.

When he finally arrived to report at JKN Sarawak in Kuching, he expected an interview so that he could discuss with the authorities where his placement would be

However, to his horror, in the halls of JKN Sarawak, the administration called out the names of over 100 doctors one by one to inform them of their placements, which were pre-allocated at either a hospital or a health clinic.

Lim said he was given a placement in a district health clinic in Bekenu, a small fishing town located an hour’s drive away from Miri, which is an hour’s flight away from Kuching.

On that day, he said he had tried to appeal his position, given his interest in neurosurgery, to be placed at a hospital anywhere in Sarawak with at least an operating theatre to train. However, his efforts fell on deaf ears.

According to him, JKN Sarawak told him to speak to the director in charge of the health service department in Miri. However, when he arrived in Miri, they told him it was only JKN Sarawak that had the authority to reverse his offer.

“Is this the reason why so many of our young doctors quit MOH?” he questioned

“I feel so cheated and disappointed with our healthcare system. We are all healthcare workers striving to help our fellow citizens. Would it be right to treat your colleagues better? Sending employees to a different state and not telling them where they’ll be working until the day itself, I don’t think that is right or even up to the standards of our labour laws,” he ranted.

The aspiring surgeon said that while his hopes to become a specialist have still not waned, he warned that this mismanagement by the ministry will put off many others from staying in Malaysia or pursuing further studies, a growing trend that can be seen over the last couple of years.

“There are only 160 neurosurgeons in the whole of Malaysia right now, and out of that number, not all are working in the government,” he warned.

He said that if a patient were to have a ruptured aneurysm or a haemorrhagic stroke, there may one day not be enough neurosurgeons in Malaysia to save them.

“Most doctors don’t choose to go into neurosurgery compared to other specialties, because of the long working hours and long training program. It takes eight years. So, this has really bothered me, when JKN Sarawak did not even bother listening to my request,” Lim also shared with SAYS, who said his future and career in neurosurgery is purely at the mercy of MOH, but he shall make the most of his placement in Bekenu for now.

A Malaysian artist also recently tried to capture the absurdity that his medical officer wife had to go through when finding out her placement:

In 2021, a movement was founded to pressure the MOH to improve working conditions, benefits, and career pathways for medical officers in Malaysia: