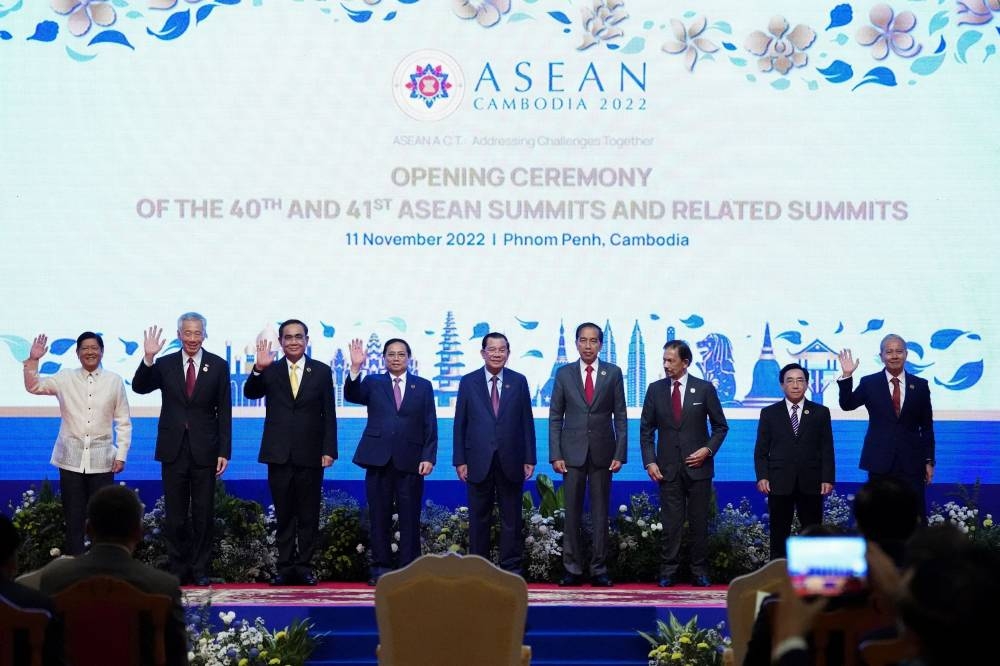 Leaders pose for a group photo at the opening ceremony for the 40th and 41st Asean Summits and Related Summits in Phnom Penh, Cambodia November 11, 2022. – Reuters pic

PHNOM PENH, Nov 11 – Leaders of Southeast Asian nations began an annual summit today that is likely to be dominated by Myanmar’s escalating violence and political gridlock, with increasingly frustrated members of the group struggling to get the country’s junta to comply with an agreed peace plan.

Several representatives of the Association of Southeast Asian Nations (Asean) have blamed Myanmar’s military rulers for failing to implement a peace plan agreed jointly last year, which includes ending hostilities and allowing access for a special envoy and aid.

Cambodian Prime Minister and Asean host Hun Sen addressed Friday’s opening ceremony with a call for vigilance and wisdom during times of economic and geopolitical turmoil.

“We are now at the most uncertain juncture; the lives of millions in our region depend on our wisdom and foresight,” Hun Sen said.

Asean, which has barred junta leaders from its meetings since last year, repeated last week its commitment to the so-called five-point peace consensus, but some members have been pushing for a stronger stance.

Leaders from the other nine countries in the bloc – Brunei, Cambodia, Laos, Indonesia, Malaysia, the Philippines, Singapore, Thailand and Vietnam – were present at the meeting in Phnom Penh.

Indonesia’s foreign minister told Reuterslast week that the junta, not Asean, was squarely responsible for a lack of progress on the peace plan and that recommendations would be made to leaders on strengthening its implementation.

Philippine President Ferdinand Marcos Jr during a meeting with Hun Sen on Thursday agreed while there needed to be patience dealing with the crisis, “we can still do more in terms of engagement with Myanmar,” according to a post on Facebook by the president’s press secretary.

The junta has blamed a lack of progress on the pandemic and obstruction from armed resistance movements that it calls terrorists.

James Crabtree, Executive Director of the International Institute for Strategic Studies-Asia, said Asean was struggling to cope with internal divisions over Myanmar and other issues.

“Whether it is Cambodia as chair now or Indonesia next year those divisions aren’t going to go away, and that is likely to continue to limit the bloc’s ability to pressure the junta in Myanmar or respond smartly to rising great power competition,” he said.

The bloc, which has a long-standing tradition of non-interference in members’ sovereign affairs, has ruled out Western-style sanctions against Myanmar or expelling it from the 10-member group, even as it condemns increasingly violent actions by the junta such as the executions of democracy activists and an air strike that killed at least 50 people.

One Western diplomat who will attend the meeting said that while the bloc may try to make the Myanmar peace plan more action-oriented, “little progress is expected”.

Officials expect a number of summits in the region in the next seven days to be difficult, with discussions also expected to include the war in Ukraine, climate and regional tensions over the South China Sea, Taiwan and North Korea. G20 leaders are meeting in Bali next week and the Asia-Pacific Economic Cooperation (Apec) forum will take place in Bangkok after that.

“The most consequential issues in the region and on the global stage right now will be addressed,” the top U.S. diplomat for East Asia Daniel Kritenbrink told reporters yesterday. – Reuters