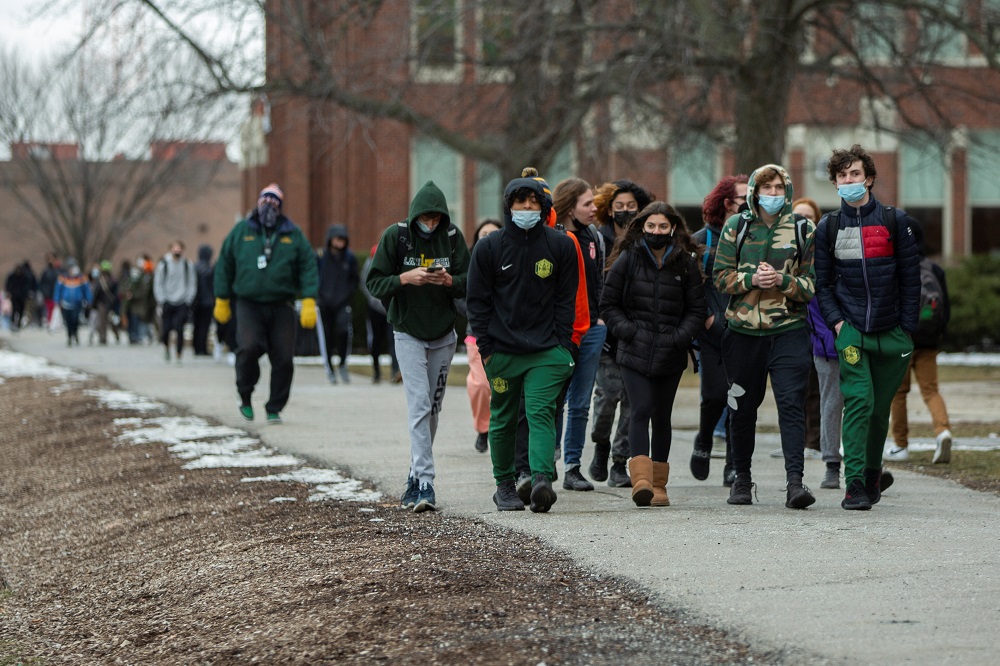 Students at Lane Tech stage one of several mass ‘Walkout for Covid Safety’ at high schools due to the Omicron spread in Chicago January 14, 2022. — Reuters pic

BOSTON, Jan 15 — Hundreds of students in Boston and Chicago walked out of classes yesterday to pressure officials to switch to remote learning, as a surge in Covid-19 cases fuelled by the Omicron variant disrupts schools around the United States.

About 600 students from 11 Boston schools participated, according to the school district. Many students returned to classrooms later, while others went home after taking part in peaceful demonstrations.

An online petition started by a Boston high school senior saying schools are a “Covid-19 breeding ground” and calling for a remote option had gathered more than 8,000 signatures as of Friday morning.

The Boston Student Advisory Council, which called for the walkout, posted a series of demands on Twitter, including two weeks of remote learning and improved Covid-19 testing for teachers and students.

The latest wave of infections has renewed the debate over whether to keep schools open, as officials seek to balance fears about the highly contagious Omicron variant with concerns that kids could fall even further behind after two years of stop-and-start instruction. The result has been a patchwork of Covid-19 policies around the country that has left parents feeling exhausted and bewildered.

Ash O’Brien, a 10th-grade student at Boston Latin School who left the building with about a dozen others yesterday, said he didn’t feel safe staying in school.

“I live with two grandparents who are immune-compromised,” he said. “So I don’t want to go to school, risk getting sick and come home to them.”

In a statement, Boston Public Schools said it supports students advocating for their beliefs and vowed to listen to their concerns.

In Chicago, a student group, Chicago Public School’s radical Youth Alliance, organised a walkout at various city schools on Friday afternoon, followed by a rally outside the district’s headquarters.

Students had just returned to Chicago schools on Wednesday after a week of canceled classes due to a standoff between teachers and the school district over Covid protocols. The teachers union agreed to return to in-person instruction after striking a deal to strengthen safeguards.

Earlier this week, students at several New York City schools staged a walkout to protest what they say are inadequate safety measures. Mayor Eric Adams said on Thursday his administration was considering a temporary remote learning option for the significant number of students who are staying home.

Nearly 5,000 public schools across the country have closed for at least one day this week due to the pandemic, according to Burbio, a website that tracks school disruptions.

The Omicron surge appears to be slowing in areas of the country that were hit first In the last week, new cases have risen only 5 per cent in Northeastern and Southern states compared with the prior seven-day period, according to a Reuters analysis. In Western states, by contrast, the number of new cases has climbed 89 per cent in the past week compared with the previous week.