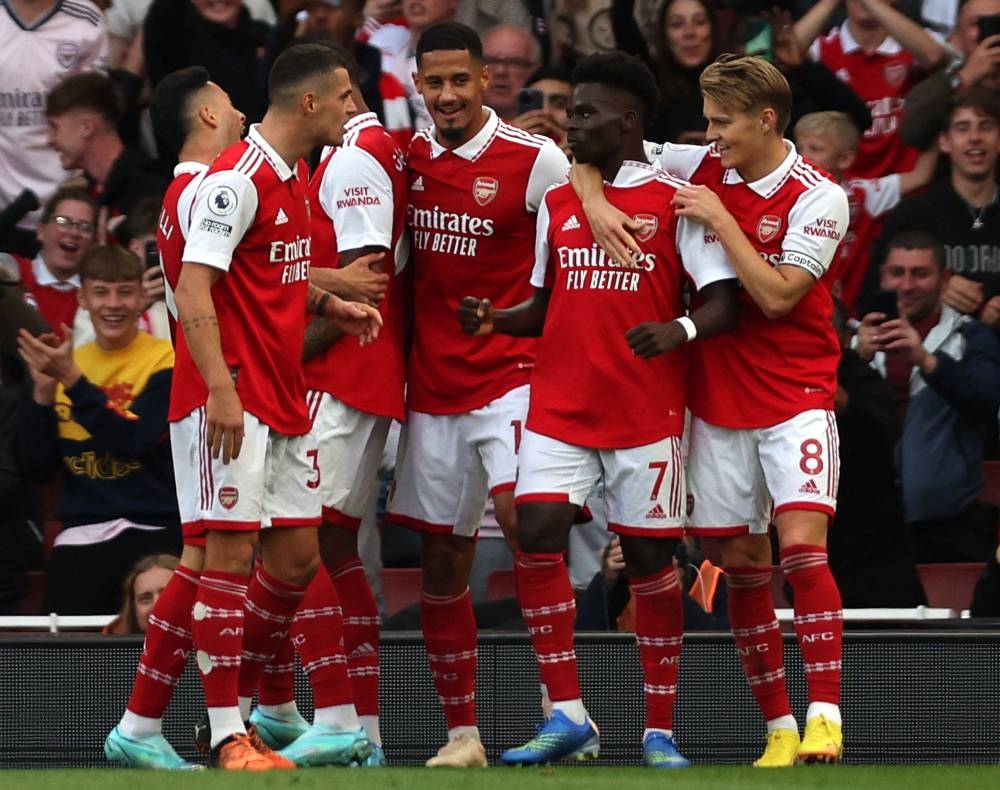 Arsenal midfielder Bukayo Saka celebrates scoring the team’s second goal during the match between Arsenal and Liverpool at the Emirates Stadium in London October 9, 2022. — AFP pic

LONDON, Oct 10 — Arsenal 3-2 win over Liverpool not only took them back to the top of the Premier League but showed Mikel Arteta’s side have added backbone and self-belief to their thrilling brand of football, making them title contenders at last.

Arsenal have sometimes been one of the Premier League’s most exciting teams but have been characterised for their mental fragility and their tendency to crumble against top opponents.

Not any more. In a pulsating match against Jurgen Klopp’s side, who pushed Manchester City all the way in last season’s title race, they recovered twice from surrendering the lead to come out on top.

It was only the second time Arsenal have beaten Liverpool in the Premier League in the last seven years but the performance confirmed the team’s new-found resolve.

For the fourth consecutive home game in the league, they have either fallen behind or conceded an equaliser but still gone on to win, beating Fulham, Aston Villa and north London rivals Tottenham Hotspur before their latest scalp.

“I saw a team I really identify with, the personality they show in difficult moments,” said Arteta.

Arsenal have been renowned for blooding young players since Arsene Wenger became manager in 1996 although a lack of success since their last league title in 2004 has often been put down to not having enough senior players.

But Arteta’s team are also characterised by their youthful nature. The average age of their starting line-up yesterday was 24, with goalscorers Gabriel Martinelli and Bukayo Saka each being 21.

The difference between this side and the under-achieving teams towards the end of Wenger’s reign is their experience. Martinelli made his debut in 2019 while Saka has been a regular since the 2019-20 campaign.

The winger missed England’s final penalty in the Euro 2020 final penalty shootout but barely flinched when he stepped up to score the winning goal against Liverpool from the spot.

Another factor behind Arsenal’s rise this season has been the attitude of the supporters, who have turned their ground into an unlikely fortress, winning all six games there this season in all competitions.

Arsenal’s previous ground Highbury was jokingly referred to by rival supporters as the library and the 60,000-capacity Emirates Stadium, which they moved into in 2006, has also been mocked for a lack of atmosphere and fans leaving early or lashing out at their own players when results went against them.

How times change. The home fans rose to their feet to rally their team after Roberto Firmino and Darwin Nunez’s equalisers yesterday and Arteta said the fans played a huge part in the win.

“I’ve never seen it like this,” added the manager.

“You cannot imagine how much it helps the players and how much belief and confidence, how much support it gives us. It’s one of the nicest things we’ve done since we’ve been together here — to unite everybody and feel like you go here and you’re going to have some experience.” — Reuters