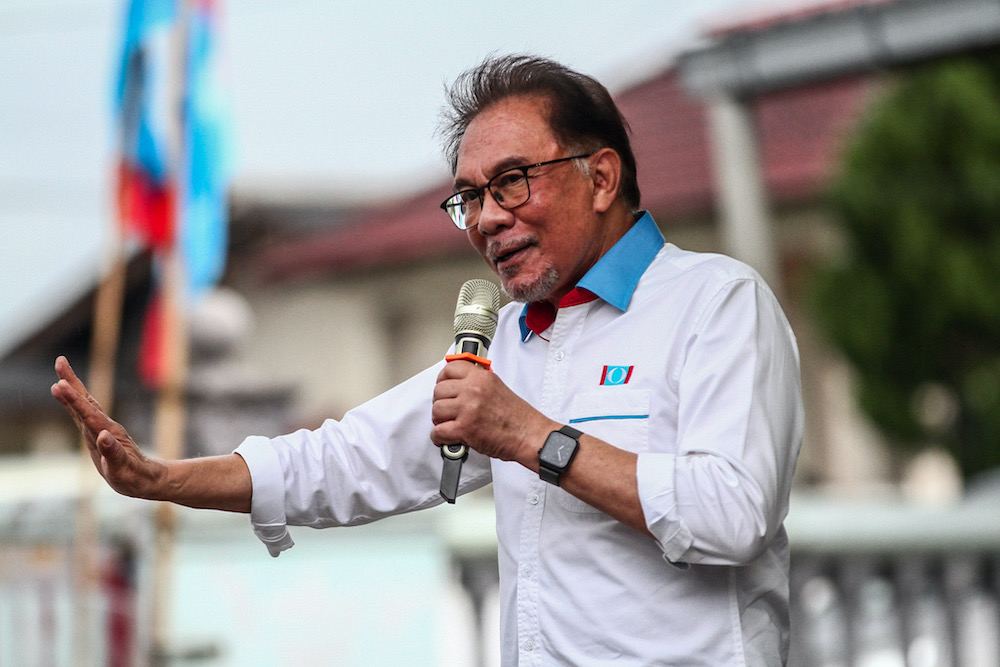 Datuk Seri Anwar Ibrahim’s statement adds to the pressure on the government for concrete and holistic action against all the 1MDB culprits. – Picture by Hari Anggara

KUALA LUMPUR, April 11 — Opposition Leader Datuk Seri Anwar Ibrahim wants Putrajaya to haul all the culprits responsible for the massive looting of sovereign investment fund 1MDB to courts here so that Malaysians can get their “justice”.

He said senior Goldman Sachs officials whose negligence led to the massive financial losses and damage to Malaysia cannot relinquish their responsibility either.

Anwar noted that Roger Ng, the sole Goldman Sachs banker to have been tried in court had been convicted in the US, it would be dishonest to claim that justice had been upheld since testimonies throughout the former banker’s recent trial only revealed the roles many others played in the “scam”.

“The sworn statements by witnesses have overall dismissed the claims by Malaysian government officials that nothing had happened in Terengganu Investment Authority and then 1MDB.

“Senior Goldman Sachs officials involved in the 1MDB scandal cannot escape their negligence as well as the damage and losses caused to Malaysia.

“On Goldman Sachs’ apparent involvement in this ‘scam’, I reiterate my position that the settlement reached between the Malaysian government and Goldman Sachs in 2020 was premature and failed to consider the losses that Malaysians will continue to bear,” he said in a statement today.

The PKR president also highlighted that the authorities have given repeated assurances that they are going after conspirators like Malaysian fugitive Low Taek Jho — better known as Jho Low — but that nothing has happened so far.

“They were moving freely in Malaysia for many years until a few days before the last general election.

“How many opportunities to drag these ‘scam’ conspirators to face justice have been missed?

“I will not remain silent as long as these people do not appear in court in Malaysia. We want justice for Malaysians,” Anwar said.

Anwar’s statement adds to the pressure on the government for concrete and holistic action against all the 1MDB culprits.

Both highlighted that Ng’s case had uncovered evidence of embezzlement involving key Malaysian government officials and leaders at the time, before urging for Ng’s trial in Malaysia to be expedited so that justice can be served immediately.

Anwar who is Port Dickson MP reiterated his stance on Putrajaya’s settlement with Goldman Sachs over its role in the 1Malaysia Development Berhad (1MDB) scandal, describing it as premature and flawed.

In July 2020, the Finance Ministry had announced that a settlement amounting to a whopping US$3.9 billion had been agreed with Goldman Sachs for its involvement in the arrangement of three bonds for 1MDB.

Anwar said the amount of money siphoned from 1MDB would never have gotten past close supervision and scrutiny without the intervention and roles played by senior government officials.

“Malaysians deserve to be angry and disappointed with the characters of those in power who were able to stop this robbery from happening. Yet, the same people remained silent and allowed it to take place,” he said.

Breon Peace, an attorney in the US eastern district of New York, called the verdict a victory for not only the rule of law but also for the people of Malaysia for whom the fund was supposed to help raise money for projects in their country’s economy.

US prosecutors say Ng who was formerly Goldman’s Malaysian head of investment banking, helped his former boss Tim Leissner embezzle money from 1MDB and launder the proceeds and bribe officials to win business for the US private bank.

1MDB was set up by the Malaysian government to get investments for development projects.

Low was also charged alongside Ng in the US in 2018, but has so far escaped the law.

He is charged under Section 370(c) of the Capital Markets and Services Act, which carries a punishment of up to 10 years’ imprisonment and a fine of at least RM1 million, upon conviction.

Although Ng is charged with abetment, a charge against the US investment bank was dropped in September 2020 after Goldman Sachs agreed to a US$2.5 billion (RM10.6 billion) financial settlement with Malaysia.