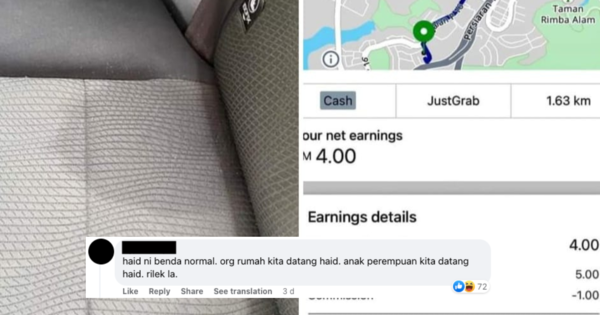 Stories of nightmare passengers from e-hailing drivers are not an uncommon thing, but what constitutes being labelled a ‘bad’ passenger?

A recent confession made by an anonymous e-hailing driver was published to the public Facebook group, B40 Buat Perangai Apa Harini.

In the post that was submitted by Facebook user Is Khi, the unknown person writes about how one short drive caused serious ‘damage’ to his car. Having drove a female passenger, the man soon smelled something quite unsettling, only to discover a wet stain on the backseat of his car.

Not taking him long to discover what it was, the man soon realised that the stain was menstruation blood.

Opening his caption, the man begins his post by mentioning how he realised something was wrong after dropping off a female passenger

“I smelled something sour and fishy,” he wrote. “It smelled so strong that I had to stop my car and check the backseat.”

After discovering the stain, the man alluded to touching the wet spot, as well as moving his face close to it to smell it. “I was shocked, and it smelled so bad that I almost threw up.”

He then proceeded to take a cloth and wipe the stain. After pressing down on it, blood leaked out of the polyester seat. “That’s when I realised, it was period blood.” The man also Googled what period blood smells like, confirming his suspicions later on.

A photo of the period stain in the driver’s car, and a receipt of the drive.
Image via Facebook

Following the incident, the driver mentioned that he proceeded to call the Grab centre to report the incident. “I asked them to clean my car, and send me the receipt later on. Thankfully, I could claim [my money back].”

Ending his post, the man mentions that since this occurrence, he is still not completely comfortable eating in his car when he needs to. “It was all just my luck!”

Since releasing the post, plenty of people have sounded their diverging opinions on the issue

A couple of users emphasised that menstruation is a natural occurrence for women, and they should not be judged for it.

One user said that this is a very sensitive topic. “It’s not as though she purposely leaked when she sat in your car. I would feel so sorry to scold her, maybe she’d be too embarrassed to admit it.”

Empathising with the driver, the user went on to advise the man that since he was able to claim for the damage, he should take this as a learning lesson, and move on. “Maybe next time you can put a plastic cover over your seat to prevent a similar situation from potentially happening.”

Another person criticised the anonymous confessor for sensationalising the issue. “Of course it is revolting, but don’t shame someone for it. Your mother also experiences this, so does your wife, and your daughters. We all bleed the same.”

One user sought to defend the man’s post, saying that driving people around is how he makes a living.

“His car is used as a source of income, that’s why he’s mad. If the passenger admitted it, explained it nicely, and sought forgiveness for the accident, I think this wouldn’t have blown up to become a big issue.”

Nonetheless, one woman seemed to give insight into the situation, and provided her solid take on the matter.

“Periods are normal. What isn’t normal is leaving it there and not saying anything to the driver. As a woman, periods gross me out too. For those who are saying that she may not have noticed it, don’t make excuses for her. If it gets that wet, it means she was having a heavy flow — and probably got her whole pants wet,” she said.

Adding on, the commenter said that had the person responsible for the stain told him that she accidentally leaked, this would have never become an issue. “Common sense is to apologise, no matter the circumstance.”

While this man is concerned for the condition of his car, another man spends about three-fifths of his salary on the new Perodua Alza: