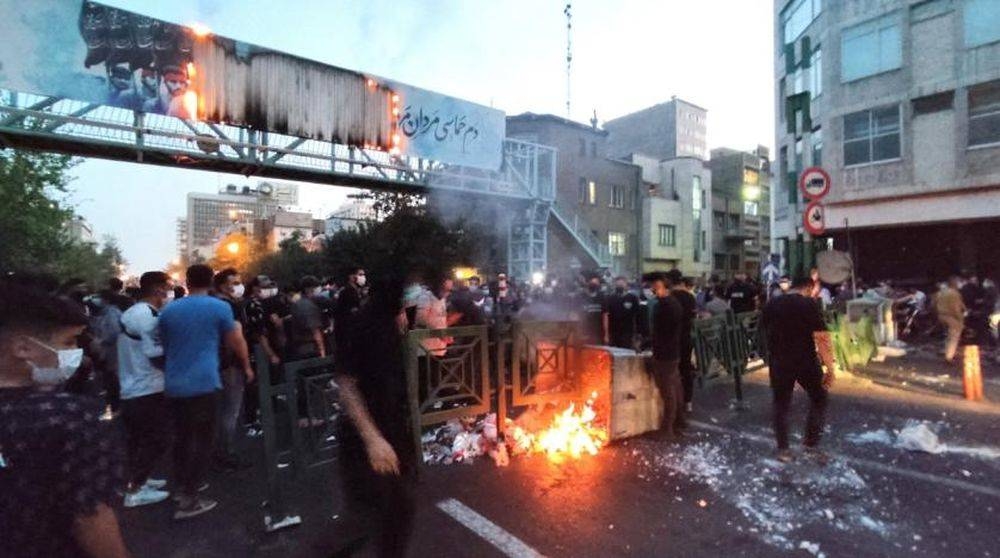 People light a fire during a protest over the death of Mahsa Amini in Tehran, Iran. — Reuters pic

It came two weeks after demonstrations began in Iran over the death of Mahsa Amini, following her arrest in Tehran for allegedly flouting the Islamic republic’s strict dress code for women.

The protests were initially fanned by fury over the restrictive rules for women, but they have grown into a broad movement against the theocracy under supreme leader Ayatollah Ali Khamenei, 83.

“Death to Khamenei,” chanted men who emerged from mosques in Zahedan after Friday prayers, in a video published by IHR.

The rights group says at least 304 people have been killed at the protests across Iran since Amini’s death on September 16.

It says around a third of them were killed in Sistan-Baluchistan, including at least 92 who died on September 30 — in a massacre that activists have dubbed “Bloody Friday”.

The latest demonstrations come a week after more than a dozen people were killed in a crackdown by the security forces in Khash, another city in Sistan-Baluchistan.

Protests were seen taking place in Khash again today, and dozens of riot police were seen heading to protests in Iranshahr, in the same province, in video posted on social media and verified by AFP.

Security forces were seen firing tear gas to disperse protesters in Iranshahr, according to video published by the 1500tasvir monitoring channel.

Amnesty International said at least 18 protesters, bystanders and worshippers — including two children — were killed in the crackdown on the “largely peaceful protests” in Khash.

The London-based rights group said it had recorded the names of at least 100 protesters killed by security forces in Sistan-Baluchistan since September 30, but added that the real number was much higher.

It called on the international community “to take urgent action to stop further killings of protesters in Sistan and Baluchistan province and across the rest of Iran”.

“The UN Human Rights Council must help break this cycle of systemic impunity by establishing an independent investigative and accountability mechanism to investigate crimes,” Amnesty added.

Mass arrests have seen 1,000 people charged so far and activists say many risk the death penalty.

A panel of UN rights experts took that cause up today, urging “Iranian authorities to stop using the death penalty as a tool to squash protests”.

In a phone call with UN chief Antonio Guterres, Hossein Amir-Abdollahian also criticised Western countries that have pressed for a special session of the UN Human Rights Council on Iran’s response to the Amini protests.

Amir-Abdollahian said such a session should instead be held for “governments that propagate violence and terror, not for (Iran), which is the true defender of human rights and has exercised serious restraint regarding the recent riots”.

The crackdown has mainly involved riot police, the Islamic Revolutionary Guard Corps and members of its Basij paramilitary force, many of them in plainclothes.

But Iran’s army ground forces commander said yesterday his troops were awaiting orders from Khamenei to intervene against the protesters.

Brigadier General Kioumars Heydari said the army’s failure to intervene so far should not be misinterpreted.

“If today the revolutionary community is not responding, it is because that is what the supreme leader has decided,” he said. “But the day he gives the order to deal with them, they will have no place in our country.”

The Iranian authorities have waged a campaign of mass arrests to quell the protests, with athletes, celebrities and journalists caught up in the dragnet.

Activists have called on football fans attending the World Cup starting later this month to chant Amini’s name during the 22nd minute at each of Iran’s matches. She was 22 years old when she died.

“Help us immortalise #MahsaAmini and our fight against this brutal regime. At the 22nd minute of each World Cup game, say #MahsaAmini,” tweeted New York-based campaigner Masih Alinejad.