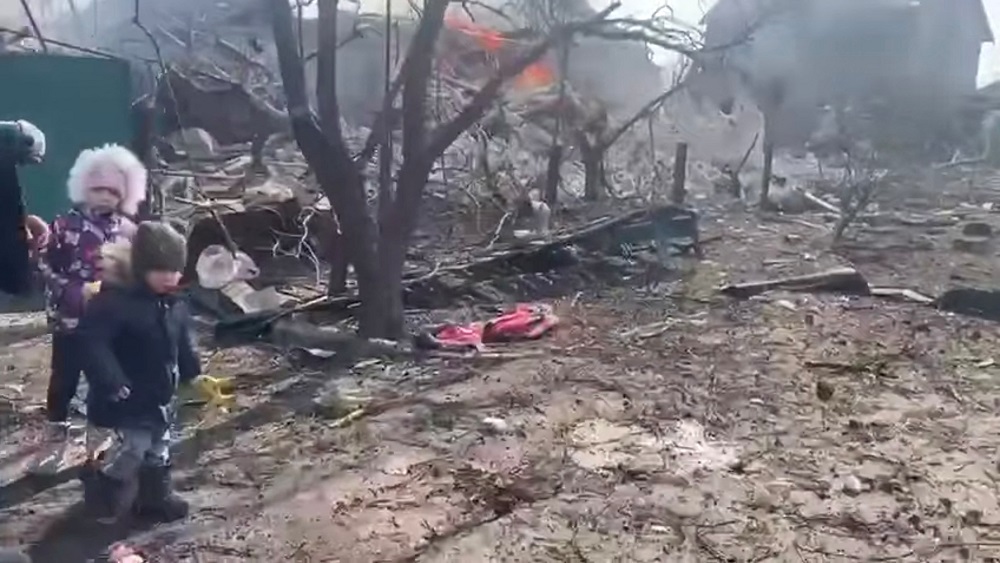 Screengrab from a video posted on social media showing the aftermath of Russian artillery shelling on a residential area in Mariupol, Ukraine March 10, 2022. — Picture courtesy of Armed Forces of Ukraine/Handout via Reuters

KYIV, March 13 — Russian forces upped the pressure on Kyiv yesterday and pummelled civilian areas in other Ukrainian cities, amid fresh efforts to deliver aid to the devastated port city of Mariupol.

In Moscow, the defence ministry described an unrelenting push on the ground, reporting that Russian forces had advanced 12 kilometers (seven miles) over “a broad front” during the day, without specifying exactly where.

It said pro-Russian separatists in the east had reached the edge of Severodonetsk, a city of 100,000.

Russian strikes have destroyed the airport in the town of Vasylkiv, south of Kyiv, the mayor said.

The northwest suburbs of the capital, including Irpin and Bucha, have endured days of heavy bombardment while Russian armoured vehicles are advancing on the city’s northeastern edge.

Kyiv Mayor Vitali Klitschko said the capital, described by a senior Ukrainian official Friday as a “city under siege”, was reinforcing defences and stockpiling food and medicine.

Buses were continuing to bring refugees into the city from the hard-hit suburbs, Klitschko said in a video message, adding: “We will not give up.”

Other cities have already fallen or been surrounded since Russia invaded its neighbour on February 24, with civilians targeted in what the United Nations warned could amount to war crimes.

The southern port city Mariupol in particular is facing what Ukraine says is a “humanitarian catastrophe”, with more than 1,500 civilians killed over 12 days.

“Unfortunately, the humanitarian situation in Ukraine is continuing to deteriorate rapidly, and in some cities it has reached catastrophic proportions,” said the head of the Russian National Defence Control Centre, Mikhail Mizintsev.

But some Ukrainian soldiers remained hopeful: one in Kyiv, 27-year-old Ilya Berezenko, said he doesn’t believe Moscow has “enough men or equipment to occupy” Ukraine.

Russia’s soldiers are “not numerous enough and (are) far from home” he told AFP, adding that they “will end up wearing themselves out”.

Prompting a small glimmer of hope, Ukraine President Volodymyr Zelensky said yesterday that Russia — after appearing unbudging for days — had adopted a “fundamentally different approach” in the latest talks to end the conflict.

He told reporters he was “happy to have a signal from Russia” after Putin spoke of “some positive shifts” in a near-daily dialogue.

Elsewhere across the increasingly desperate country, there were only scattered signs of progress.

A humanitarian convoy loaded with 90 tonnes of food and medicine left the town of Zaporizhzhia for Mariupol yesterday, according to local officials, with hopes that it will be able to evacuate civilians on the way back.

Some evacuation efforts have been fruitful. According to Deputy Prime Minister Iryna Vereshchuk, nine of the 14 humanitarian corridors opened were successful.

Nearly 13,000 people were able to evacuate yesterday on those routes, while the remaining five were blocked by factors such as Russian troops or shooting, she said.

Russian troops shot at a group of women and children leaving a village near Kyiv, killing seven, including a child, the Ukrainian military intelligence service reported.

The United Nations estimates that almost 2.6 million people have fled Ukraine since the invasion, most of them to Poland, in Europe’s worst refugee crisis since World War II.

As Russia widens its bombardment, Zelensky’s pleas for help have grown increasingly desperate.

Washington and its EU allies have sent funds and military aid to Ukraine and taken action against Russia’s economy and oligarchs. A cultural and sporting boycott has further isolated Moscow.

Yesterday, US President Joe Biden authorised up to US$200 million in weapons and other aid to Ukraine.

In Irpin, a Ukrainian soldier who gave his name only as Viktor showed off his British anti-tank missile system and the twisted remains of a Russian vehicle it destroyed.

“I want to say a big thank you to our British comrades,” he said.

As international sanctions against Moscow have steadily tightened, crippling Russia’s economy, the country’s space agency Roscosmos warned yesterday that the International Space Station could crash if Russian spacecraft serving the ISS are affected.

‘Cinders in his lungs’

The situation in Mariupol remains “desperate”, according to Doctors Without Borders, with no water or heating — and food supplies dwindling.

“Hundreds of thousands of people… are for all intents and purposes besieged,” Stephen Cornish, one of those heading the medical charity’s Ukraine operation, told AFP.

Prime Minister Denys Shmyhal said it would be necessary to restructure the country’s economy given the lack of supplies throughout, and urged people in areas with no active combat to return to work.

In the southern city of Mykolaiv, meanwhile, an AFP reporter said a hospital there came under fire.

Mykolaiv, which lies on the road to the strategic port city of Odessa, has been under attack for days.

“They shot at the civilian areas, without any military objective,” said the hospital’s head, Dmytro Lagochev.

In Kharkiv, in the east, doctors at a hospital described spending two days pumping ash from the stomach of an eight-year-old whose home was struck by a Russian missile.

“He still has cinders in his lungs,” Dima Kasyanov’s doctor told AFP.

Facing growing international condemnation, Putin yesterday sought to turn the tables, slamming Kyiv for what he described as the “flagrant violation” of international humanitarian law and accusing Ukraine’s army of executing dissenters and using civilians as hostages.

The French presidency denounced his accusations as “lies”.

In a stream of video messages, Zelensky has urged Ukrainians to keep fighting and demanded his country’s allies do more.

Yesterday, he said Moscow was suffering “enormous losses”, before giving Ukraine’s first toll of around 1,300 troops killed so far.

US estimates put Russian fatalities at 2,000 to 4,000 while Moscow’s only official toll, announced last week, said 498 Russian troops had been killed. — AFP