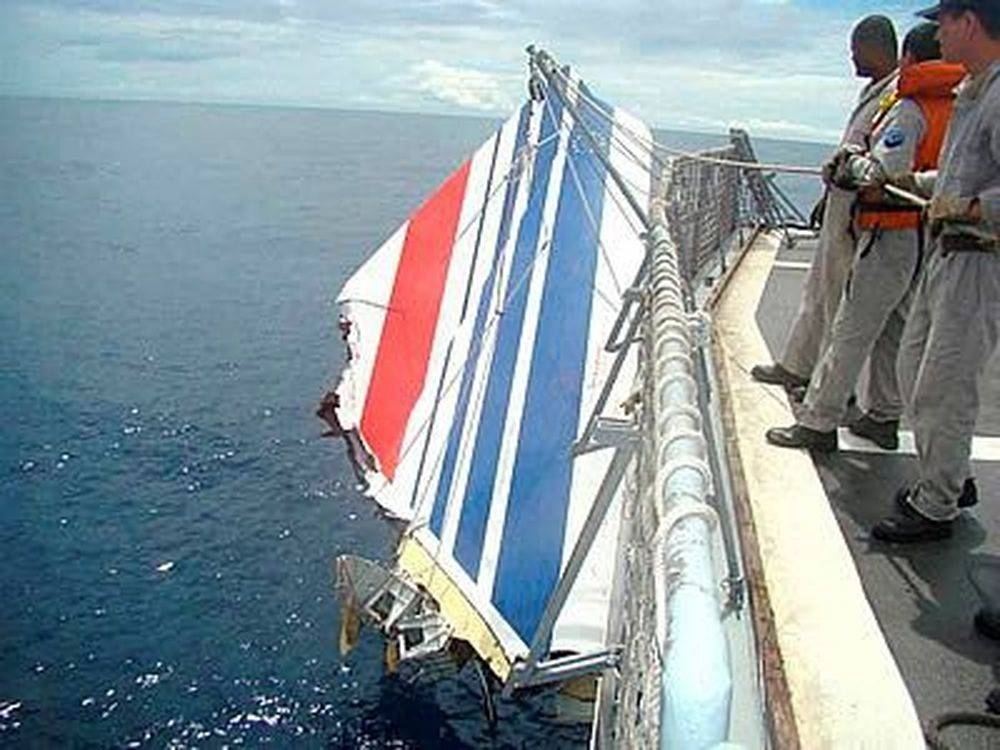 The Brazilian Navy picks a piece of debris from Air France flight AF447 out of the Atlantic Ocean, some 745 miles (1,200 km) northeast of Recife, in this handout photo distributed by the Navy in Recife, northeastern Brazil June 9, 2009. — Reuters/Brazilian Air Force/Handout pic

PARIS, Oct 7 — More than 13 years after an Air France jet plunged into the Atlantic, killing all 228 people on board, the French carrier and planemaker Airbus go on trial in a Paris court next week with relatives seeking “light at the end of a long tunnel”.

Flight 447 vanished in pitch darkness during an equatorial storm en route from Rio de Janeiro to Paris on June 1, 2009.

After a two-year search for the A330’s black boxes, French investigators found pilots had mishandled the temporary loss of data from iced-up sensors and pushed the 205-tonne jet into an aerodynamic stall or freefall, without responding to alerts.

But the BEA accident agency also disclosed that Air France had expressed concerns about increased icing incidents before the crash and had started receiving improved speed probes. Experts say the relative roles of pilot or sensor error, as well as erratic displays or fatigue, will be key to the historic trial.

Monday’s opening hearing will mark the first time French companies have been directly placed on trial for “involuntary manslaughter” following an air crash, rather than individuals.

While corporate reputations and a long-awaited catharsis for families are at stake, the nine-week trial is not expected to lead to significant financial penalties. However, experts say larger sums have been paid in compensation or civil settlements.

The maximum fine for either company, if convicted of involuntary manslaughter, is just EUR225,000 (US$220,612) or five times the maximum monetary penalty for an individual, who unlike a company can also face jail, according to French legal experts.

That represents a little over two minutes of pre-Covid planemaking revenues for Airbus or five minutes of passenger revenues for airline parent Air France-KLM AIRF.PA, according to 2019 data. There are also significant legal costs.

Even so, AF447 sparked a broad rethink about training and technology and is seen as one of a handful of accidents that changed aviation. But reforms have followed the methodical pace of global regulation or become mired in industry disagreements.

Among dozens of safety recommendations, experts say the investigation led to critical changes in the way pilots are trained to cope with mid-air upsets, or loss of control.

But a call from the BEA for studies into better tracking in radar dead-zones met little response until the disappearance of a second jet, Malaysia Airlines MH370, five years later.

Over a decade after the BEA’s initial findings, there are no signs of another of its longstanding concerns being addressed.

Although black boxes provide important clues, the trial could rekindle a long-running privacy row over whether cockpits should also be monitored visually to decipher future accidents, especially now that security cameras are part of everyday life.

In 2011, the BEA recommended the addition of cockpit video recordings to be consulted only in case of an accident, supplementing existing voice and data information.

It has been pushing for their introduction since an earlier Airbus crash 30 years ago, and the US National Transportation Safety Board last year put the same idea on its list of “Most Wanted” safety improvements – saying it would have been “extremely helpful” in investigating Boeing 737 MAX crashes.

Pilot unions oppose cameras as an invasion of privacy, while some airline industry groups have questioned the cost. The US Federal Aviation Administration said it encourages cameras on a voluntary basis while studying screen-capture technology.

The trial at Paris Criminal Court runs until Dec 8.

Yemenia was fined the maximum EUR225,000 over a separate 2009 crash by a French court last month and says it will appeal. — Reuters