8 Things To Remember Before Watching Season 5 Of ‘The Crown’ 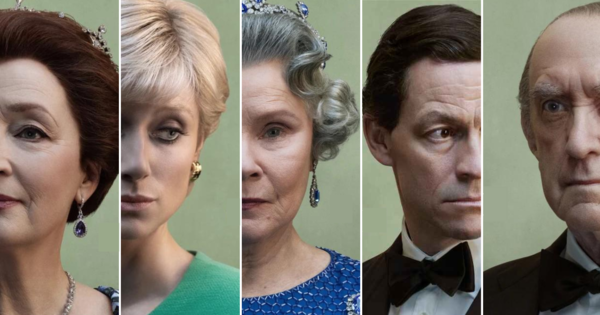 All rise for their majesties, the cast of The Crown Season 5

Netflix’s cult hit The Crown is back with the fifth season for their series, which surrounds the reign and legacy of the world’s longest reigning female monarch, Queen Elizabeth II.

Heading into one of the most controversial eras of her queenship, the upcoming season is expected to be the most highly anticipated of the entire show thus far.

But before diving into the season that is said to drop on 9 November, there are a few things to keep in mind.

Grab your crowns and a bowl of popcorn, here are eight things to remember before watching Season 5 of The Crown.

[SPOILER ALERT]: Multiple historical events and depictions in the series’ trailer will be discussed, so read at your own risk!

1. The entire cast has changed

For viewers who have been long-time fans of the series, this may come as no surprise. However, for the few who are newly catching up, you may be wondering where Olivia Coleman went. Well, she’s gone.

A common theme practised by the showrunners of the series is to shake up the cast every two seasons, bringing the show into different time zones that lead to present day. With the conclusion of Season 4, a whole new batch of actors have been cast to play the British Royal Family.

Among them include Imelda Staunton, most known for playing Dolores Umbridge in the Harry Potter series, who will be taking on the role of Queen Elizabeth II herself. Other actors include Jonathan Price as Prince Phillip, Dominic West as (the now) King Charles, and Elizabeth Debicki as Princess Diana. As with the upcoming season, viewers will be slated to watch Queen Elizabeth II rule during the early to late 1990s.

2. The season will largely focus on the downfall of Charles and Diana’s marriage

Image via Us Weekly

While Season 4 of the series covered the beginning of one of the most highly publicised marriages in UK history, between the now King Charles III and the late Diana, Princess of Wales, the end of their union will be the primary plot for Season 5.

With the series covering the events of Queen Elizabeth’s life in the 1990s, rest assured that the very public separation of her eldest child and his wife will be in the thick of this timeline, as they announced their separation in 1992, only to officially get divorced in 1996.

According to the show’s synopsis, the season will see Charles pressure Elizabeth into allowing him and Diana to properly divorce, thereby plunging the entire reign of the monarchy under immense scrutiny. From secrets that they lived in separate houses to ideas of extra-marital affairs, expect all of these matters to be discussed in Season 5.

Claudia Harrison, set to play Princess Anne in Season 5.
Image via The Crown/IMDb

Though the chilling introduction to the trailer of Season 5 has Queen Elizabeth announcing her intention to reflect on her reign, the immense trouble brewing behind the scenes of the Royal Family only unmasked itself in 1992.

Marking the year as her annus horribilis, otherwise known as ‘horrible year’ in Latin, the Queen recalled a number of events which took place that inevitably shook the status of the Crown — one of which was the collapse of three marriages relating to her children.

As Charles and Diana’s was the most highly publicised, many may not recall that Princess Anne and her first husband, Mark Phillips, officially divorced in April 1992, while the Queen’s third child, Prince Andrew, and his former wife, Sarah “Fergie” Ferguson, announced their separation a month earlier in March.

Needless to say, it’s likely that the marital drama that surrounded the siblings will at the very least, be mentioned in passing.

4. Camilla Parker Bowles will be brought to the forefront of the season

Olivia Williams, who plays Camilla in ‘The Crown’ Season 5.
Image via Netflix (YouTube)

The secret of Charles and Camilla’s courtship after his infamous divorce from Diana did not go unnoticed in real time back in the late 80s to early 90s.

However, it seems as though the introduction of Camilla into the series will add another layer to the already complicated plot of a dissolving marriage.

Although it is unlikely that her character will not see any scrutiny in the upcoming season, the manoeuvring of their relationship is definitely something worth the watch, as we will get to see how Camilla makes her way into the royal family to become the future queen consort.

5. Martin Bashir’s controversial interview with Princess Diana in 1995 will be dissected

A screen grab from the series trailer of the interview.
Image via Netflix/YouTube

There’s probably not a Princess Diana fan on Earth who doesn’t recall “An Interview With HRH The Princess of Wales“, a documentary episode that aired on BBC in 1995 where Diana discussed the pitfalls of her relationship with her husband to journalist, Martin Bashir.

What many may not know, is the sinister workings that took place behind the scenes that curated one of the most controversial interviews of all time.

Without giving too much away, a scene from the trailer where the character of Bashir says, “She wants to tear down the temple? Let’s go for it,” may have something to do with it. Needless to say, the addition of forged receipts, conniving rumours, and unverified information had much to do with the documentary episode that has stood the test of time.

The first appearance of the two princes in Season 4 saw the duo donning diapers. Season 5, however, will see a major shift in the character arc of young Prince William and Prince Harry, navigating their childhood and teenagehood while coming to terms with their birthrights as British royalty.

Telling the story of the boys just years before they’re set to lose their mother in 1997, the trailer depicts a rather melancholy and teenage-angst William dealing with the separation of his parents, too.

Despite the intriguing storyline, it seems as though not everyone is happy about his portrayal, with royal experts criticising the show for portraying William as a ‘sad and unfulfilled’ individual.

Image via The Limited Times

7. Yes — we’ll be getting the revenge dress

Shortly after their separation, a bombshell announcement by the then Prince of Wales led to a series of events that could only be described in a single word — iconic.

On Wednesday, 29 June 1994, an interview with Prince Charles aired to over 13 million viewers across the UK with a segment of him admitting to cheating on Princess Diana. That same evening, Diana attended an event for the Serpentine Annual Summer Party hosted by Vanity Fair, in a dress she herself once described as ‘a little too much’.

Though she had originally declined attending the event, her decision to make an appearance has since created a global phenomenon, which is now most commonly known in pop culture, as ‘The Revenge Dress’.

After attending the party, Diana stole the show from her former husband’s scandalous interview. While not much has been revealed about that moment, we will undoubtedly get to see its feature in the upcoming season.

Princess Diana (left) in the dress in 1994, and Debicki (right) for the show.
Image via Eonline

8. Not everything in the show is historically accurate

Shocking, isn’t it? Well, not really.

Though the entire premise of The Crown covers the highs and lows of the world’s most famous royal family, it should be noted that not everything within the series has been based in fact. After certain controversies surrounding the show came alive in Season 4 that were later revealed to be untrue, many have called for Netflix to include a disclaimer in the series, as part of the portrayals are fictionalised from real, historical events.

Some of those who have supported this movement included UK actress, Dame Judi Dench. While it seems as though Dench’s efforts have paid off with Netflix agreeing to add a disclaimer for Season 5, it should be reinstated that not everything discussed from all the prior seasons were entirely true, too.

Will you be watching the penultimate season of The Crown?

Tune in to Netflix on 9 November for the premiere of Season 5.

Watch the trailer for Season 5 of The Crown below:

It was recently announced that the upcoming Black Panther movie will be premiering in Malaysian cinemas, despite certain controversies: