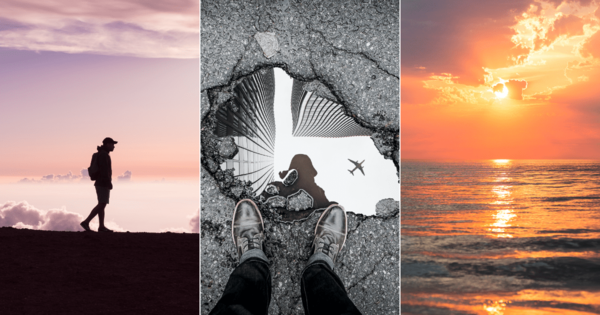 If you take pictures in low light areas and use flash, they often come out as overexposed with altered colours and washed out subjects.

If you find a place you want to take a picture of, it’s best to snap a shot where natural light is abundant. This gives you a chance to play with shadows, while making your picture look appropriately lit and not overexposed.

2. Utilise gridlines to balance your shot

By turning on your smartphone camera’s gridlines, they superimpose a series of lines on the screen that are based on the ‘rules of thirds’.

Basically, the rule of thirds breaks an image down into thirds, both vertically and horizontally, so you have nine parts in total.

The theory suggests that if if you place your subjects within these intersections or along the lines, your photo will be more balanced, level, and allow viewers to interact with it more naturally.

It’s a way to improve your compositions and make your pictures look nicer, even if you have little to no photography experience.

Our eyes are drawn to reflections, so take use of the opportunity to capture shots that showcase them.

Reflections are a unique type of photography, where you can capture images as to how its reflected. Additionally, there are many places you can find natural reflections, from puddles of water and metallic surfaces, to drinking glasses and sunglasses.

4. Make use of leading lines

Basically, leading lines is a photography technique that guides the viewer’s eye in a photograph.

For example, in the picture above, the bridge would lead your eye towards the shadowy entrance of the forest. Leading lines are important because they direct a viewer’s eye to where the photographer wants them to be looking.

They take the viewer around the journey in a photo and keeps them engaged. Leading lines are suitable for any kind of photography, from portraits to landscapes. Mainly, they add a unique aesthetic to your travel pictures.

5. Don’t miss out on golden hour

The golden hour is a period of time shortly after sunrise and slightly before sunset. During this time, the sky appears redder and softer.

It is a great time to start shooting any type of outdoor photography from self portraits to landscape shots. According to photographymad, the warm glow during this hour adds a pleasing feel to the scene, while also adding texture and depth to an image.

It is a creative photography technique that hides your subjects in the shadows and allows viewers to debunk their own meanings and stories from a photograph. You can take advantage of the golden hour to snap some quality silhouette pictures as well!

Wherever you’re going, you’ll want a reliable, compact, and sophisticated travel companion with you.

With a 200MP main camera, a powerful Snapdragon 8+ Gen 1 processor, and a 1220p AMOLED display, the Xiaomi 12T Pro checks all the boxes.

The Xiaomi 12T series is the ideal travel companion as it captures crystal clear images with its 200MP imaging system on the Pro version, the first of its kind in the Malaysian market. It also has groundbreaking features like the Xiaomi ProCut that intelligently crops and creates professional-looking pictures!

Have a look at these mesmerising and authentic pictures taken with the Xiaomi 12T Pro that may just push you to book that flight ticket you’ve been delaying:

Furthermore, the camera in the Xiaomi 12T series can zoom into pictures while not missing out on important details with precise clarity.

Check out this detailed picture of a zoomed-in mountains across the plains of Scotland. You can see the outlines of the mountains in its full grandeur.

Forget the worries of running out of battery with the Xiaomi 12T’s 5,000 mAh battery and Xiaomi 120W Smart HyperCharge

When travelling, you’re sure to use your phone a lot for pictures and navigation, so one of the worries most people have is whether or not their phones have enough juice to last the whole day.

You won’t need to worry about this with the Xiaomi 12T, as it boasts a large 5,000 mAh battery, paired together with the Xiaomi 120W Smart HyperCharge that’ll charge up the phone quickly, even when you’re on the go!

Additionally, through testing done from Xiaomi Internal Labs, users can enjoy up to 13.5 hours of screen-on time, and charge to 100% in just 19 minutes. That said, battery life may also vary depending on other factors such as network environment and usage patterns.

The Xiaomi 12T is the ideal travel companion because it is compact, dependable, and can take images reflected with clarity and accurate colours

You’ll no longer need to lug around a huge camera to take detailed and mesmerising pics during your travels.

Whether you’re travelling domestic or international, you’ll have the chance to capture the perfect moments through a reliable, yet compact device within the Xiaomi 12T lineup.

The smartphones are available in Blue, Silver, and Black.

They are currently priced at:

There will also be an exclusive promotion that you can get into that’s available just for this November, where every purchase of any phone within the Xiaomi 12T series will come with a pair of free earbuds. Yay!