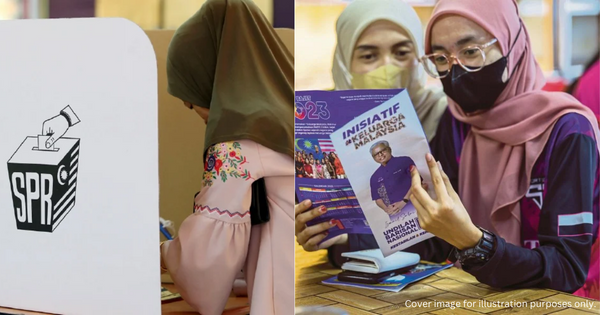 The Constitution (Amendment) Bill 2019 was passed by the Dewan Rakyat on 16 July 2019, lowering the voting age in federal and state elections from 21 to 18 years

The federal gazette was signed by Chief Secretary to the Government Tan Sri Mohd Zuki Ali on 25 November 2021, and it was published on 1 December 2021, reported Malaysiakini.

“In exercise of the powers conferred by Subsection 1(2) of the Constitution (Amendment) Act 2019 [Act A1603], the Yang di-Pertuan Agong appoints 15 December 2021 as the date on which Section 3 of the Act comes into operation,” read the gazette, as reported by Bernama.

This means that for the first time in Malaysian history, Malaysians who turn 18 this year will be able to vote in the 15th General Election (GE15) on 19 November.

SAYS conducted a survey specifically for 18-year-old Malaysians to learn how this new generation of voters feels now that they can vote.

Image for illustration purposes only.
Image via New Straits Times

When it comes to voting, the youth understand the importance of selecting the right candidate.

Seven of the 21 respondents said they are still undecided about who or which party they will vote for because they do not want to vote for someone who will not bring about change.

While some are still unsure about who to vote for, all 21 of them are aware of their responsibility as Malaysians to vote.

When asked how they feel about voting for the first time, Ween told SAYS that they are overjoyed to have the opportunity to use their voice and change the country.

“To me, today’s youth are more aware and accepting of the current political situation, allowing us to make informed choices regarding our leaders. It is now time to allow the voices of the youth to be heard, as they have been silenced for decades in previous elections,” said Ween.

For one respondent, Keshauv, the younger generation is more than prepared for this historic moment, as they have been watching the political state of this country from the side lines for years

“The older generations have to stop saying we are not good enough. With this chance that you gave us, we will prove to you that we want the best for the country too,” he said.

While most are confident that their fellow 18-year-olds will do the right thing, Chua said that she is nervous for the youth.

Chua added that her generation is not fully aware of politics, nor do they know who can take over the country.

“I can only hope that my generation will not let Malaysia down,” said Chua.

Image for illustration purposes only.
Image via Free Malaysia Today

When asked what changes they would like to see in Malaysia’s future, 42% of respondents stated that racism should be eradicated from all aspects of life, including academics and career opportunities

According to Lara, she grew up witnessing injustices against the country’s minorities.

She believes that her vote in the upcoming elections is critical in order to stand up and allow all Malaysians, regardless of race, skin colour, religious beliefs, gender, or sexual identity, to live in harmony.

“We just want a safe country for everyone to live in,” said Lara.

Three respondents said that they would like to see the government improve the education system, particularly by assisting less privileged students

Aside from a better education system, the youth want higher wages and more job opportunities for their generation.

Three other respondents said they want corruption to end, indicating that Gen-Zs are being educated on the dangers of bribery and corruption.

“For once, I want to see healthy and clean politics in our country,” said Keshauv.

Image for illustration purposes only.
Image via Berita Harian

SAYS then asked the 21 respondents about their fears about Malaysia’s future.

Nine respondents expressed concern about the Malaysian economy, fearing that it would not improve.

“I have heard that we will be facing a recession, and I am terrified to think of how my family will survive through that period,” said Adam, who recently continued his studies at a public university.

He went on to say that if prices for everyday items continue to rise, his family will suffer, and he will be forced to take part-time jobs while studying to help them.

Adam’s worry is shared by many other concerned families who are anxious about how they will cope financially when the recession hits, just as they are getting back to work after the COVID-19 lockdowns, which had already severely harmed their finances.

Johari said that the country’s erratic implementation of lockdown measures during the fight against the COVID-19 pandemic had hampered economic growth, reported New Straits Times.

He continued by saying that 98% of businesses in Malaysia were classified as small and medium-sized enterprises (SMEs), which accounted for nearly half of all jobs in the country. Yet, they had lost business capital due to the flip-flop measures.

Johari’s observation of how SMEs tried to survive during lockdowns is exactly what these families had to go through because Gen-Z’s parents are the ones working for these SMEs.

Meanwhile, four respondents expressed concern about their ability to find employment in the field they are currently studying.

They also believe that current wages are unlivable and that the government should address this as soon as possible.

“I fear that no matter how hard we work, we can never escape from the cycle of corrupt leaders with backhand dealings,” said Rina.

Four other respondents said they fear that discrimination and racism will become more common in Malaysia’s future.

The young voters also emphasised the importance of inclusivity and how much they are against racial prejudice.

“I am tired of seeing politicians using race and religion to win votes. This will only lead to an even more divided nation,” said Alia.

Image for illustration purposes only.
Image via Berita Harian

When asked whether they believed that their vote would make a difference, six of them said no

Despite saying no, five of the six individuals still believe they have to vote.

“Some of the most corrupt leaders have governed this country, but I am doing my part, and I am voting in hopes of seeing a progressive development in the future,” said Dan.

Image for illustration purposes only.
Image via Kosmo!

Based on the results of the short survey, this SAYS writer concludes that the 18-year-old voters are well informed about the country’s current political situation

These young voters and future leaders understand the importance of voting and how their votes could affect their lives.

The respondents also came from various backgrounds, and each expressed concerns that were unique, authentic, and distinct from one another.

From the education system to corruption, job wages, and racial prejudice, the Gen-Zs demonstrated that being young does not preclude them from wanting what is best for Malaysia.

With a monumental election coming up in just a few days, the idea of voting has not been conclusive for some Malaysians:

For all first-time voters, here are some things you need to know before voting:

Before voting day, make sure to check your voting details and your voting station via this online platform: