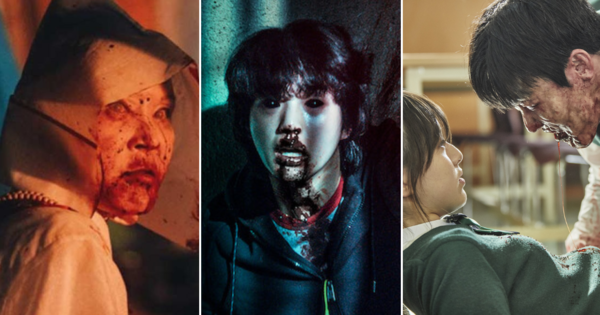 With Halloween just around the corner, we’re all looking to add some spook into our lives.

For most extroverts, the ideal way to spend All Hallows’ Eve would be by throwing a Halloween party or attending one put together in epic proportions. However, not every person wants to be out painting the town red and scaring others left, right, and centre.

As for the introverts who prefer a quiet night at home, horror shows hit just the right spot to get your scare on — and for K-drama fanatics, it would be even better! This Halloween, it’s time to approach a different brand of horror, and explore the fascinating aspects of South Korean horror dramas on Netflix.

Here are 10 horror K-dramas to get your spook on this Halloween:

[SPOILER ALERT]: The shows listed below are discussed briefly, so read at your own risk!

Image via Heaven of Horror

It would be rather strange that a demon would possess other demons instead of humans, but in this case, one inhumane spirit may have other plans in the works.

After being plagued by their family’s mass murder from when they were children, a boy-girl duo unite in their adulthood once they notice a series of killings that seem a little too familiar.

Determined to discover the true meaning behind their childhoods and mysteries that were never solved, you might not want to watch The Guest with the lights off as demons are not an uncommon creature in this world.

Plagued by a disaster that claimed the lives of his entire family, a loner soon finds himself in peak solitude when he moves into an apartment while trying to escape interactions from the everyday world.

But when the world itself starts to change and manifest, plunging its citizens of South Korea into sheer disaster, our protagonist will be left with no choice but to face his traumas. Fighting everything and anything that comes his way, you’ll be kept on your feet trying to see if he can keep himself alive in Sweet Home.

Image via What’s on Netflix

A mini-series that does a stellar job at standing on its own two feet, Hellbound tells the tale of a forbidden prophecy that makes its way to Earth, and begins to condemn people to — you’ve guessed it — hell.

Banding together to get to the bottom of everything that’s been going on, our main group of leads try to understand what is going on, and how everything ties together in its own sadistic way.

Unravelling before their very eyes, word of a cult, supernatural phenomena, and even a modern-day mafia flip the events of the show on its head, keeping you guessing at every turn.

An anthology series that somehow interconnects due to the similar backdrops of each episode, Goedam dives into different horror tales that encapsulate the ‘teenage girl’ experience.

Based in a South Korean high school, the show dives into a series of varying topics while still keeping the suspense of this thriller at the centre of our attention.

Gaining notoriety for discussing taboo topics when it was released, including LGBT representation and the importance of preserving one’s mental health, this series elevates itself to be one of the horror classics for the ages.

Driven to do the right thing, an enthusiastic reporter learns the hard way that not all noble causes will be awarded justly.

Covering a violent case against the biggest IT company in South Korea, she soon comes across their chairman’s reliance on shamanism. Delving deeper into her investigation, she’s led down a road to discover secrets that were best keep hidden.

Another horror series that broke the mould for television shows that cater to K-drama audiences, the amalgamation of horror, mystery, and treachery makes The Cursed truly absolutely unforgettable.

While most people who’ve been unfortunate enough to survive deadly accidents normally explain how it changed their lives, it probably doesn’t affect them in the same way it does our main protagonist, who starts to see ghosts after surviving a horrible accident.

After meeting a man who takes away this ‘gift’ through a single touch, things only become more complicated from that point onward. Forced to find a way out of the madness, this pair take up a nearly impossible task to free themselves of their horrendous bounds. But will their efforts lead to resolution?

A unique addition to the list, horror isn’t the only genre that carries through The Master’s Sun, with a dash of romance added to the mix, it could take the edge off for certain scaredy cats.

What started out as a normal day for the students at Hyosan High School takes a big turn after a science experiment goes horribly wrong in All Of Us Are Dead.

Infected by an unknown virus, one student’s injury leads to creating a school covered in zombie-esque creatures that will stop at nothing to quench their hunger for blood. As it starts to spread beyond the confines of the school grounds, a deeper military investigation shows that things may not have been as accidental as portrayed.

Struggling to survive, follow the teens of the school as they try to discover the truth, and stay alive before help arrives.

Haunted hotels may seem like an awfully clich? concept, but what happens when our world and the afterlife start to blind into an indistinguishable reality?

Old beyond measure, a greedy soul has been bound to operate as the CEO of the establishment, Hotel Del Luna, since committing a heinous crime a thousand years ago.

Doomed to spend the rest of eternity there, her only escape is to find another that has committed a worse sin than her and take over operations. While she seems to lose hope after residing in the hotel for as long as she has, a perfectionist with a delicate secret may be her key out of this eternal suffering.

After his father, The King, falls deathly ill, the Crown Prince of Joseon attempts to investigate what is really going on throughout the series of Kingdom.

Digging deeper and finding more than he would’ve bargained for, the show goes into a series of frightful discoveries after it is revealed that a deadly epidemic may be ravaging the entire kingdom, taking down every citizen one by one.

Giving us so much more than just a clich? horror classic, Kingdom does a phenomenal job of keeping you on your toes, while discussing critical issues of politics and the social class system within a society alive many years ago.

A classroom’s dream is to have one of their teachers call in sick for the day and get a substitute, so they can do whatever they want to, right? Well, not for the kids of Nightmare High.

In this one-season-wonder, a group of kids discover that their newest substitute teacher, who replaced their homeroom tutor, has more to him than meets the eye. Possessing supernatural abilities, things start going funky around the school when certain teenagers’ deepest, darkest wishes start coming true — and not in a good way.

While all the other staff members are aware of this teacher’s existence, his very apparent absence on the teaching staff list makes this series a must-watch for horror fanatics.

Have you watched any of these? Did we miss out on any great ones? Let us know!

If light-hearted horror is more your thing, watch a blast from the past with the new Mr Midnight series on Netflix:

Prefer the movie theatres? Check out this Malaysian horror film that made history for the nation:

Here are some other Asian horror movies to check out on Netflix: